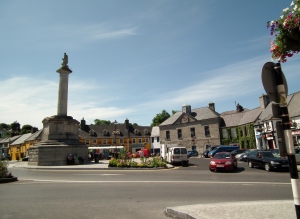 Our first full day in County Mayo started with a major discovery: inside two weeks we had been in two places with public spaces that were, for obvious reasons, called “Octagon”. The first was in Budapest, Hungary, and the second in Westport, County Mayo. Perhaps you know of more places by this name?

We were in Westport to meet Pastor Paudge Mulvihill who is the experienced but unassuming leader of Calvary Mission – a network of Christians working together to establish Bible-centred churches in the West of Ireland. Paudge is also a key partner for One Mission Society in the Republic of Ireland.

Over a quiet lunch in the town we learned from Paudge that after many years of dedicated and difficult work Calvary Mission now has a book shop in Westport (on the Octagon), six churches active in Mayo and Roscommon, a new building just purchased in central Westport as a community and worship centre, and a plan to see several more church groups planted in other strategic towns in the years to come.

Paudge was truly inspiring, but it was clear he did not feel there was any personal chemistry or magic formula involved in growing God’s Kingdom in Ireland. Indeed many of his perspectives concerning the opportunities and challenge of witnessing about Jesus mirrored what we had heard from Andrew earlier in the week in Midleton. However, the Spirit filled determination and dynamism of Paudge was clear as he humbly outlined his work overseeing the mission, leading the Westport church, editing the excellent 4you.ie Magazine that is distributed across the Republic of Ireland, and acting as Honorary Secretary to Aontas (formerly the Association of Irish Evangelical Churches). It is clear that God continues to inspire and motivate His workers in this remote and needy corner of Ireland. 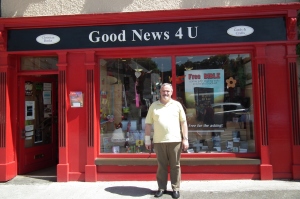 Pastor Paudge Mulvihill in front of the bookshop in Westport

Westport was voted the best place to live in Ireland in 2012. In the sunshine as we walked its well laid out streets, continental style tree-lined riverside avenues, and well preserved Georgian architecture, it was easy to see why. Unusually for Ireland this is a planned town created by Lord Sligo in the late 1700s to clear the locals out of the old village that spoiled the view from Westport House. Even the curator of the local museum in Wesport Quay had to interrupt her strident anti-Anglo-Irish version of local history to admit that the result was good for all involved.

Westport sits at the head of Clew Bay and is made all the more impressive by the horizon being filled by conical Croagh Patrick. For most Roman Catholics who climb Croagh Patrick,  especially on the last Sunday of July, the pilgrimage to the top of the sacred mountain is an act of penance and hence many climb barefoot. One Mission Society is always there – not to preach the Gospel with words, but to be a shining light to that Gospel by giving out to the pilgrims free cups of juice and a Gospel tract.

During the pilgrimage 13 Mountain Rescue teams and the Irish Air Corps seek to save those who stumble or get lost on their trek up Croagh Patrick. How much more important for the eternal salvation of people in Ireland that Paudge and Calvary Mission are there year in, year out, witnessing to the one true way,truth, and life.