Ruth and I breakfasted in early morning sun with the sound of Thomson’s Falls in the background, baboons searched for food in the lawn outside, and a walk back to our rooms through blooming flowers. It was idyllic.

However, even though most of the guests were holidaying Kenyans, it was difficult not to feel awkward at the comfort we were living in, and difficult not to feel isolated from the real world that lay outside the gates. And certainly, as we passed through the guarded gate on our way to Nyahururu the manicured lawn was replaced by dusty packed earth, the smooth drive for potholed road, and the colonial lodge for wooden shacks.

Today Silas and I were scheduled to train pastors gathered in a Nyahururu church from the 33 churches overseen by Simon in this part of Kenya and from other churches in the region. But just getting to the church was an adventure as our van inched through the crowded marketplace of rough built stalls to a three story building that stood proud in the centre. The church was literally an “upper room” with a pub below and shops on the ground floor.

Once again Silas and I complimented each other. First Silas covering the theory and biblical basis of mentoring as an approach to developing church leaders. After a typical lunch of soda and dry bread I then followed up with a session on practical tools for mentoring and coaching. I was humbled to be speaking to men who so faithfully ministered for Christ in such difficult circumstances and who were so keen to soak up all they could to help them in their role. Many might have been poorly educated but their enthusiasm and innate intelligence more than made up for that. Would that more of our young Christian men in the UK would demonstrate similar zeal.

Afterwards we met with Simon for dinner and had a wide ranging discussion about his ministry through encompassing discipleship and church planting as well as humanitarian work such as running an orphanage with 65 children, and providing medical support to the most needy communities in the region.

Simon had that deep voice, imposing presence and quiet gravitas that you somehow expect in an African leader, and certainly he has the clear vision that you would expect. The clue is in his organisation’s name: God’s Grace For All Nations (GGFAN). There are over thirty unreached people groups in northern Kenya up to the Ethiopian border, and Simon is determined that they should have the opportunity to hear the gospel. These tribes include Turkana, Samburu, Rendile, Borana and Ilchamus and many of these don’t even have a written language yet, let alone a bible in their heart language. Hence Simon’s interest in training leaders to train leaders; that the gospel might ripple out across the region; that every knee might bow and every tongue confess that Jesus is Lord.

This certainly seems a daunting task on the face of it, but Simon’s comitment to keep Christ’s commandment to go and make deciples of all nations, his faith in Christs call, his strength of leadership, and his clear strategic intent are envigorating,

Perhaps there is a role in there for two middle-aged, white Europeans after all 🙂 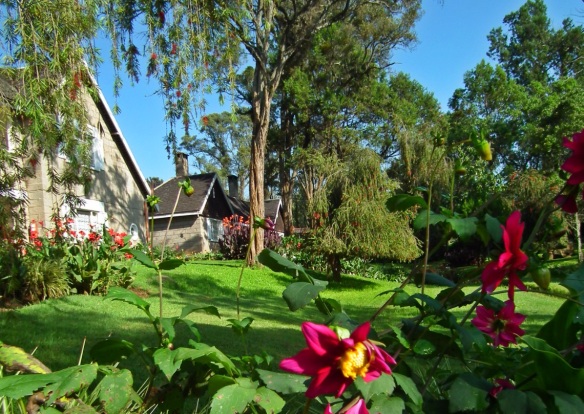