Myles really enjoys the opportunity to get out to preach in different parts of the country and last Sunday (14 June) he had the chance to travel to Chisinkha ZEC, south-west of the tarred road to Thyolo. (See it on Google Earth here.)

As a Sunday morning drive to church it was rather special, traveling through the green tea plantations of the region that turn the rolling hills as bright green as the grassy Perthshire countryside. 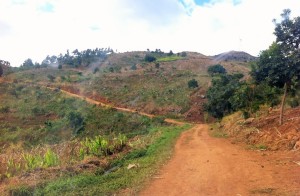 Isolated along miles of rough dirt track made impassable by rains for much of the year, we saw the church emerge over the brow of a hill on the platform hacked out of the hillside by the villagers using their multi-purpose hoe (khasu).

This vibrant, united, thriving Christian community was planted by Limbe ZEC (our home church) some years ago after the body of a member was returned for burial (as custom dictates) from her city residence to the village she had been born in. The villagers were so moved by the Gospel message they heard proclaimed by the Limbe ZEC pastor that they  immediately asked that a church be formed that they could continue to have God’s Word opened and explained.

Myles had been asked to speak on Acts 3:11-26 and had a wonderful time unpacking Peter’s second sermon. What a wonderful example Peter gives us with his ‘gospel in a nutshell’ in Acts 3:19-20 – an example of how faithful disciples everywhere can ‘witness the truth to the crowd’ in word and deed.

Repent, then, and turn to God, so that your sins may be wiped out, that times of refreshing may come from the Lord, and that he may send the Messiah, who has been appointed for you—even Jesus. (Acts 3:19&20)

5 thoughts on “Life on the edge”