As we count down the remaining weeks in Malawi, we find ourselves asking more and more “What will happen to this when we leave?” It has always been our goal to try and avoid dependency, so that things can carry on as we bow out.

With Echoes of Grace, Ruth has been really encouraged over recent months to see these young people show an increasing depth of commitment to each other and the group, grow spiritually, and take responsibility for organizing things themselves. They have set up prayer groups depending on location, spent a night in prayer for Echoes of Grace, and planned their latest outreach with very little input from Ruth. 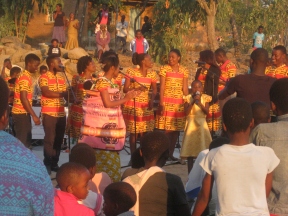 They have also seized the opportunity to start an income generation scheme, so that they can fund their own outreaches. Since the beginning of June Ruth has been teaching them to sew, and they are making simple things like bags, aprons and banners for sale. This in itself has shown their commitment to the group, their desire to simply be together, and their determination and willingness to do whatever they can to fund a ministry they believe God has given them to do.

For most of them, using a sewing machine was completely new, but they were keen to learn. They use Ruth’s own machine, and another has been provided by Zambesi Mission. The sewing sessions have given Ruth a chance to get to know some of the young people better, and the situations they find themselves in are typical of many young people in Malawi: 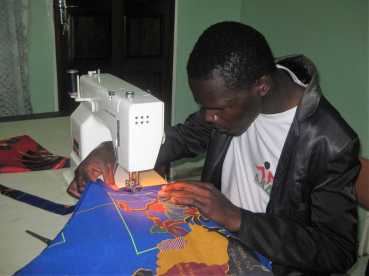 Chikondi has a qualification in accountancy from college, thanks to an uncle who was able to finance the course. But she is unable to find any work now, and is back living with her family waiting for something to come along. Favour has just completed his MSCEs (school leavers certificate), and awaits his results in October. He would love to go into medicine if he gets the grades, but his own parents would not be able to finance that, he would be dependent on another family member. Praise is a primary school teacher, and after months of no work following qualifying, he now teaches at his local primary school – but the government is notorious for not paying its teachers. He is already owed several months’ pay. He came to learn to sew one day when the schools were shut because of a teacher’s strike! Bridget actually studied tailoring and design, but did not have enough money to buy a machine for herself, so has not been able to make a career of it. Instead she has occasional work promoting soap powder outside supermarkets. But she is thrilled to get the opportunity to be sewing again, and is an obvious candidate for taking a lead on the scheme whenever Ruth leaves. Maggie works occasionally as an events’ organizer, and often records adverts and voice-overs. So when the young people are beginning to tire after a few hours of needlework, Maggie often instigates the creating of little promotional video clips for everyone’s amusement!

Life is difficult for young people in Malawi – even for the very bright ones, who have been fortunate enough to obtain sponsorship to gain a qualification. But it is so encouraging to witness these particular young people, and their desire to learn whatever skills they can. It is humbling to see how they will put their time and energy into raising money for their ministry, even when they have many personal needs themselves.

When Ruth returns to the UK at the end of the year, she hopes to bring some of their items with her, because we know many of you will be keen to support Echoes in this way. She will leave them with the machines, equipment, and a supply of cloth, and hopes they will continue this little industry to help to grow the work of Echoes of Grace: ministering to the villages of Malawi through music. 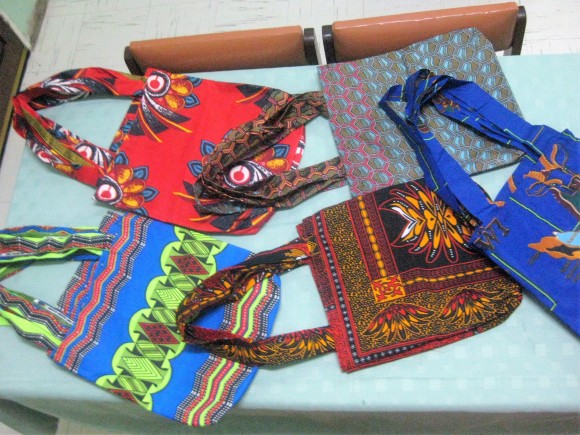 5 thoughts on ““Made for you by Echoes of Grace””