We have lift off!

Sunday 24th September dawned bright and sunny, and by mid-morning children’s choirs were gathering in the beautiful surroundings of St Michael’s and All Angels CCAP church to prepare for the launch of Ananu Ziimbani.

The multi-purpose hall is an amazing piece of architecture, and it was a wonderful venue for this very special occasion – excellent acoustics, banked seating for the audience so everyone could see easily, and a wide platform ideal for the massed children’s choir.

There had been a flurry of activity over the last month, with each choir having their final individual rehearsal, Ruth practising with the other instrumentalists, books being printed and CDs reproduced, and every child in every choir having a uniform made. As soon as they were all assembled, there was the first and only rehearsal for the massed choir – 230 children all on stage together. 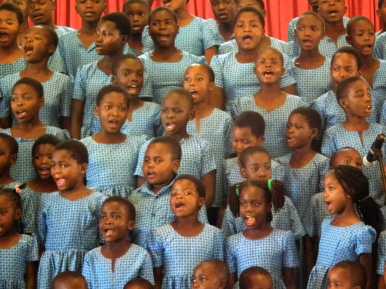 In true Malawian style, the “1.30pm start” meant there was an audience by about 2.15pm so that the event could get underway!! People continue to arrive all afternoon, as each of the 10 choirs had their own 10 minutes on stage to sing their own song-set from the book. Stephen, one of Echoes of Grace, and an excellent presenter, provided the continuity as choirs changed over, switching between English and Chichewa to help everyone in the audience follow the proceedings. Each choir was presented with a set of the new books, to encourage them to continue to sing long after the event.

But the highlight was definitely the finale when all the children joined together on the stage to sing 3 songs – “Ananu Ziimbani” (“Come, children, join and sing”), the children’s hymn from which the book took its name; “Ana tipite kudziko lonse” (based on Mark 16:15), one of many new choruses composed specifically for the book; and “Kanyali kanga kaka’ngono” (“This little light of mine”) sung in Chichewa and English to a spectacular jazzed up accompaniment. The sound of massed children’s voices was powerful, and the audience were delighted. It is fair to say there has never been an event like it for the children of Malawi. 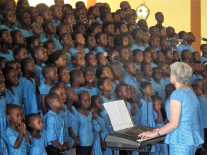 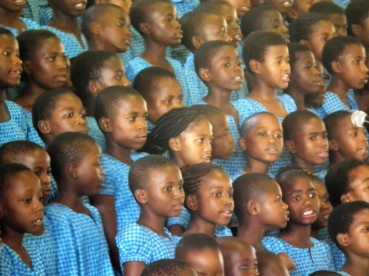 For Ruth, the event brought together many of the people she has been working with over the last 3 years. She has been rehearsing with the children’s choirs and their Sunday School teachers since last October. The royalties from the songbook are partly going to Children For Christ Ministry (CFCM) with whom Ruth has been working very closely, and her colleagues Elevate and Joseph were there to support the event. Some of the new compositions had been composed by students from the EBCoM music club who shared an interest in children’s ministry, and some of them had travelled from as far as Lilongwe and Salima just to be there for the launch. And Echoes of Grace provided the instrumentalists, the Master of Ceremonies, and the ushers. 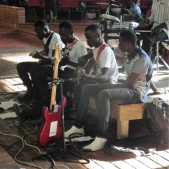 However, in the end, the afternoon was really all about the partnership between Ruth and Etiny Thole. Their combined passion for children’s ministry and music brought them together, and this was the end result. As the guys from the media interviewed them afterwards, and asked for any final comments, they both gave thanks to God: Ananu Ziimbani was all brought about by His design, and completed because of His faithfulness and love. 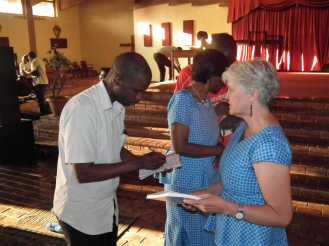