Pastors Daniel and Danny Ispas with family and visitors

In June Ruth and I had the privilege of returning to Carand in Western Transylvania in Romania. This time we were joined by our daughter and a young woman from our parent church who has a heart for this lovely country and its people.

Last August I traveled to the global headquarters of One Mission Society (OMS) where I had an eye opening, and life challenging, introduction to their approach to church planting and multiplication. One of the biggest personal impacts came from being trained by an amazing group of humble, faithful, obedient disciples who had decades of real hard-won experience evangelizing and church planting around the world. The other big impact was the wonderful opportunity to meet with so many committed church planters from around the world, including the father/son pastor team of Daniel and Danny Ispas.

Then last January Ruth and I had made an initial visit to Carand with other OMS folk. A new partnership was formed between OMS and Friendship Pentecostal Church with the objective of planting churches in Arad County in Romania, and we were being asked to act as “Church Multiplication Facilitators”. This meant committing ourselves to get alongside Daniel, Danny and their families, to mentor them in their planting work, to help with training of other church planters in the area, and to act as accountability partners for their progress against there declared plans.

Daniel and Danny have a real heart for their village and a compelling vision for their area. We had a wonderful time getting to know them and their families. Despite the difference of language and culture I found there was an immediate bond with the local Christians and their infectious good humour. God taught me again that wherever we live we all have “One Lord, One Life, One Calling”

To gain first-hand insight into developments since last January, in late June Ruth and I returned to Carand to meet again with Daniel, Danny, their families, and their churches. We had kept in touch via regular emails and Skype calls over the months but nothing beats being together face-to-face if you are to get a true feel for the spiritual health of a community.

We found this second trip to be one of real contrasts,. The first contrast was the weather. The last time we were in Romania there was thick snow on the ground and our trip was shortened by travel delays getting in. This time temperatures touched 37 Celsius, keeping cool was a priority, and we ensured we had more time to spend with Daniel and Danny, and to visit the church members and villagers.

The second contrast was of material wealth. As we spent time with the people of Carand we found many struggling all day to find the basic necessities of life. In contrast, just over the hill, we found wealthy Romanians enjoying their leisure in an alpine beauty spot.

The third, and greatest, contrast was the universal one of where people placed their faith. While material despair is driving so many of their neighbours to the false hope of alcohol and drugs, we witnessed a wonderful Godly joy in the lives of the faithful believers. Time after time as we visited the houses I was humbled by the Christ-like way people give so much in hospitality and love to all who cross their threshold.

It was also great to see the progress Daniel and Danny have made in implementing the T4T model of the ECC ministry of OMS. The weekend before I visited, Daniel had the privilege of baptising seven new Christians – male and female, young and old, Romanian and Roma (aka Gypsy). The excitement in Daniel and Danny was palpable as they reported that this meant they had been able to establish their first fresh new T4T team in Carand and had every hope of a similar group starting imminently in the Roma  church in the next village. 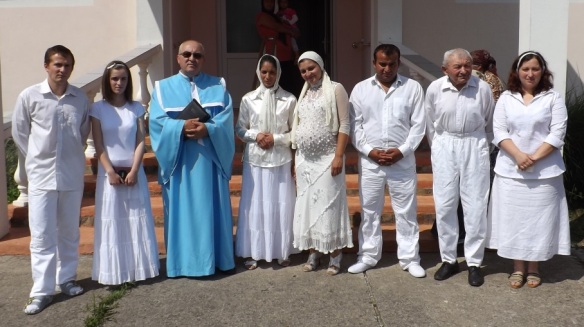 I had the privilege of, once again, speaking at the Sunday morning worship meeting at Carand Friendship Pentecostal Church. And this time, with three good female voices and a good soloist with me, we were also able to share in song as well as word. But perhaps even more moving was the opportunity to speak at the Roma church supervised by Daniel in the next village. The fellowship had just suffered a major blow with the sudden death of their Pastoral Worker. I was privileged to see God in action as a moving traditional song by the dead man’s son, the songs we sang, and the message laid on my heart (Isaiah 41:10 “Fear Not”) wove together into a single stream of healing praise to our loving Father. And how fitting that in the midst of a painful loss Daniel, Danny and I were able to celebrate a new birth with the dedication to God of a new young life.

Ruth and I left Carand having learned so much from the sheer spiritual grace of my Romanian brothers and sisters, and from the hunger of Daniel and Danny to see the kingdom grow in Romania. God has certainly lit a spark of light in one small corner of Transylvania. With Daniel and Danny’s infectious confidence in the Lord and love for the lost, who can help but pray that God will fan that little flame into a spiritual storm.